Patrick is a CrossFit Level 1 Trainer and a Second Degree Black Belt in Isshin-Ryu Martial Arts.  He has been an athlete his entire life, starting Martial Arts at the age of 4 and playing soccer or basketball throughout childhood.  Ultimately, he found a passion in CrossFit as it fit his need for competition and pushing the limits of his body.  Officially joining a CrossFit box in Denver on January 1st 2014, Patrick has never looked back and began coaching shortly after that, accumulating about 5 years of experience in the sport, both coaching and as an athlete. He joined Crossfit Indian Trail’s coaching team in 2018, and recently became the General Manager as well.

When not in the gym, Patrick spends time with his beautiful wife Victoria and two children, son Cole and daughter Brooke.  As a family they enjoy getting outdoors, going for hikes or bike rides, but really anything that allows them to spend quality time together. 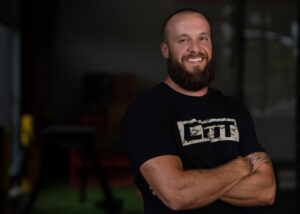 Scott has been coaching, both Crossfit and personal training, since 2012.  He became a Crossfit Level 1 trainer that year, as well as becoming a NSCA Certified Personal Trainer.  During that time, he also ran group classes at the local YMCA.  He enjoys learning all he can about Crossfit, and enjoys coaching the more complex bodyweight movements to beginning Crossfitters, such as kipping pullups and double unders.

Invested in multiple hobbies, Scott is a fitness jack-of-all-trades.  He works outside of CFIT by selling, designing, and importing fitness equipment, making him very knowledgeable about the latest equipment and gadgets in the fitness world.  Along with that, he enjoys backpacking, kickboxing, and jiu jitsu.  Outside of Crossfit and fitness, Scott enjoys cooking and his Ducati; he also boasts quite the extensive Lego collection.

Scott is a lighthearted family man, being married to his wife Jennifer, and having two children: Evan and Avery.  However, according to Scott, his children’s Lego collection pales in comparison to his. 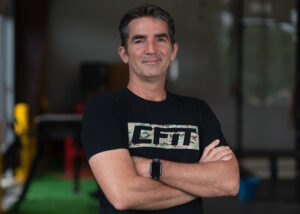 Lauren has been crossfitting for over four years now, and received her Level 1 ceritification in 2014, coaching at Crossfit Indian Trail ever since.  Before Crossfit, she had an athletic background, being a D1 college soccer player while studying at Radford University.  Along with that, she has ran over ten half-marathons, and one full marathon.  Her experience in running and soccer gave her a solid foundation in endurance training, and shows in her coaching, as well as her training.

Outside of Crossfit, Lauren is an ER nurse, although she is currently staying home with her two kids, Addie and Austin.  She is married to fellow CFIT member, Paul Caruso, and the two often find themselves competing against each other to take the top score on the daily workout. 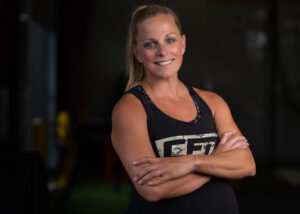 Margee has been interested in athletics her entire life.  Growing up, she played multiple sports: basketball, volleyball, track & field, soccer and golf.  In high school, she placed 10th in state for golf, and she was a conference champion in college as well.  Before Crossfit, Margee earned a lot of experience by coaching many youth recreational teams in basketball and soccer, with the ages ranging from 5 up to teenagers.  After coaching, she pursued her black belt in Taekwondo when her kids started showing interest and taking classes.  She earned her second degree black belt in Taekwondo and was also on the demonstration team at her school, where they won numerous competitions.  More recently, she has been a Taekwondo instructor for the past few years.

Margee got into the sport of Crossfit in 2014, and has won a few local and online competitions since coming back from a shoulder injury in 2016.  Most recently, she competed in the 2017 Crossfit Open and placed in the top 2% of women in her division, inching closer to her goal of one day competing at the Crossfit Games.

Soon after being exposed to the sport, Margee became a Crossfit Level 1 trainer.  She is very passionate in her coaching, always striving to learn more about Crossfit and Olympic Weightlifting.  She truly enjoys helping others achieve their goals in fitness, and views her position as coach as a privilege and great responsibility. She currently coaches our youth strength training program for middle and high school athletes. 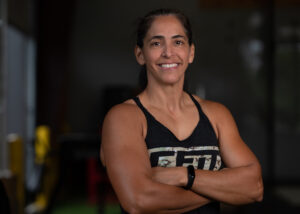 Mindy is a CrossFit Level 1 Trainer as well as a certified CF-Kids Coach. She was an elementary physical education teacher for 17 years and earned two master’s degrees in special education and kinesiology.  While teaching she was awarded “The Maryland State Demonstration School” (the highest honor awarded for a physical education teacher in the state of Maryland) for her P.E. program. She found CrossFit in 2012 when some girlfriends dragged her out of bed at 5 am to “try something new” at a Baltimore CrossFit gym and she’s never turned back.  She moved to Charlotte in 2014 and has been a member of CFIT ever since. Mindy has experience with children from ages 3 – 18 years of age designing and building programs to fit their needs. She has a passion for working with kids, has always designed lessons/workouts that are engaging, fun and teaches the foundations of fitness so children will want to become lifelong athletes.

She currently teaches preschool four days a week.  When she’s not at the gym or teaching she spends her time with her husband Brian on the lacrosse field up and down the east coast cheering on their two children Kendal (18) and Noah (15). 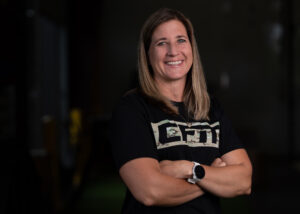 Alex Karakosta has been coaching and training in Crossfit since 2014. Prior to which he spent time training with powerlifters at the Metal Militia and attending Florida State University. Alex has spent time at several boxes and trained with and under multiple coaches who have competed at the Crossfit games. He has trained skill levels from on ramp to sport specific 1 on 1 training for high school athletes.

Having an exhaustive amount of hobbies ranging from whitewater kayaking to snowboarding. He believes while he isn’t able to do these hobbies daily, the Crossfit methodology allows him to keep up with the shredders who can. While he is no longer focused on competing in the sport of Crossfit Alex believes that no other form of training can better prepare a person for life in general, however; this doesn’t mean he’s going to let you beat him on a WOD. If you are an outdoor enthusiast who’s looking to supplement their training or to improve their abilities, feel free to pick Alex’s brain.

Alex is married to Katie at the gym and can be seen annoying her at the 4:30pm class. They work for their family business right here in Indian Trail and Alex can be seen taking lunch time rides in the area on his onewheel. 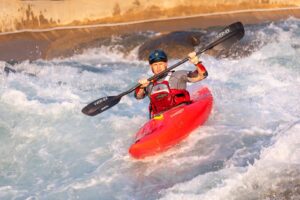